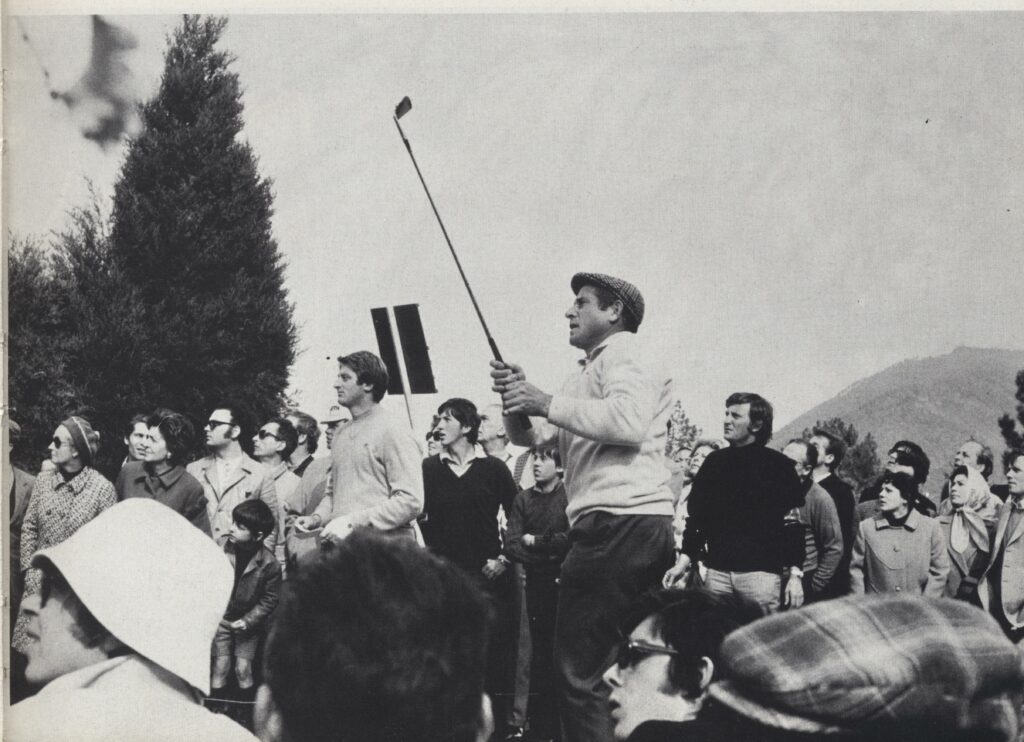 Our club has hosted 17 professional tournaments in its history, including the 1971 Italian Open. But the five Alassio Open were also extraordinary, stages of an Italian mini circuit that would have helped to give birth to the European Tour

When in Garlenda, in 1967, it was decided to give life to the Alassio Open, the promoters certainly did not think they had contributed to some sort of important revolution in the professional world of the time. The tournament, in fact, helped to strengthen the first Italian mini circuit, alongside the Cemadis Trophy in Arenzano, at the Open B.P. dell’Olgiata and at the Open Walworth Aloico at Acquasanta and threw, together with other similar initiatives in other European countries, the seeds for the European professional circuit to sprout in 1971, what is now the European Tour.

The leaders of the Garlendino club had the right intuition: they invited foreign professionals, and in particular the British ones, immediately guaranteeing the tone of a great event. Gianfranco Costa wrote to the Secretary of the P.G.A. British Bywater for the addresses of professionals who may be interested in participating. The outcome was very satisfactory, but appearance money was needed: in exchange, the players from across the Channel wanted free travel, board and lodging.

To make the show even more attractive, the managers of the club combined the performance of Gary Player on the last day of competition, for the first time in Italy. The South African was at the height of his career and dominated the scene with Arnold Palmer and Jack Nicklaus. An exhibition champion drew a champion even to the top step of the podium. In fact, Roberto Bernardini won, a player who dominated the Italian scene for a decade between 1965 and 1975 and who won three of the five editions of the tournament, played until 1972, with an interruption in 1971 when he gave way to the Open d ‘Italy. In 1968, Sebastian Miguel won, sharing the support of the Spaniards with his brother Angel and Valentin Barrios. With an excellent 67 he put Angelo Croce and Luciano Grappasonni on the ropes, second.

Bernardini returned as protagonist in 1969 and won after a long tug-of-war with the English Peter Alliss, winner of an Italian Open, and Bill Large, who was guest pro at Garlenda.

Hole 16 was an inflexible judge in the fourth edition of the competition. Emanuele Canessa won, taking advantage of an error by the Englishman Fred Boobyer, who sent the ball with the driver into a bush and had to declare it unplayable. “At that point I confess that Gigi Denari and I”, said Gianfranco Costa, “we breathed a sigh of relief: not only for the victory of a Ligurian, but also because there were now a few minutes of light left that would have made any playoff problematic” .

In 1971 the Alassio Open gave way to the Italian Open of rebirth. The then federal president Gianni Albertini, in fact, decided to restore the tournament after eleven years of suspension. In the circumstance, Garlenda won the competition of Olgiata and Acquasanta. The organization was very laborious, and severely committed all the Ligurian staff. This is how Gianfranco Costa remembered him: “The enthusiasm with which we welcomed the news was equal to our recklessness in going to meet an odyssey. We were convinced that it was a large edition of the Alassio Open for which, after four years, Garlenda had already run in. I soon realized that the amount of work was going to be enormous. The organization chart of the Open was born, wanted by Albertini, and river meetings began on a weekly basis. The president did not want to neglect anything, and after all too many years had passed since the last Italian Open to have a background, we had to start from scratch. Albertini himself designed some variations to be made to the route to make it more competitive, so the real estate company anticipated the planned expansion of the clubhouse. There were other setbacks such as the post office strike in Great Britain due to which Bill Large, our guest pro, lost contact with his compatriots. He continually reassured us about the Anglo-Saxon participation, but the registrations did not arrive. Even in Italy the distribution of entry forms had encountered obstacles, creating alarm among professionals who had difficulty in finding them. I found myself collecting inscriptions in all sorts of ways, even … by hearsay. Even time was our enemy. Rain and cold characterized the two weeks preceding the match, and we even had to keep the pitch closed on the days reserved for training. Finally March 25 arrived and as if by magic, all the mosaic tiles fell into place. There was even the sun. After many years I can say that it was a good Open, from every point of view “.

It was not the field that decided the tournament, but a night of revelry. In fact, the Scottish Brian Barnes, who was in charge after three laps, was reached by the news of the birth of his son and did not let himself be prayed to celebrate until the small hours, singing and drinking a river of beer. He was overtaken by the Spaniard Ramon Sota, uncle of Severiano Ballesteros.

The Alassio Open closed its roll of honor the following year, again with the prestigious signature of Roberto Bernardini at the end of a heated duel with the Spaniard Thomas Lopez. The fourth lap was hard fought, but the 69 achieved by both contenders left unchanged the positions acquired after three rounds. In third place went Bernard Gallacher, then an emerging young man who in his sporting life had a singular characteristic: in the six participations he always lost the Ryder Cup as a player, but he won it in the United States as captain of a team, that of 1995, in which our Costantino Rocca played a leading role.